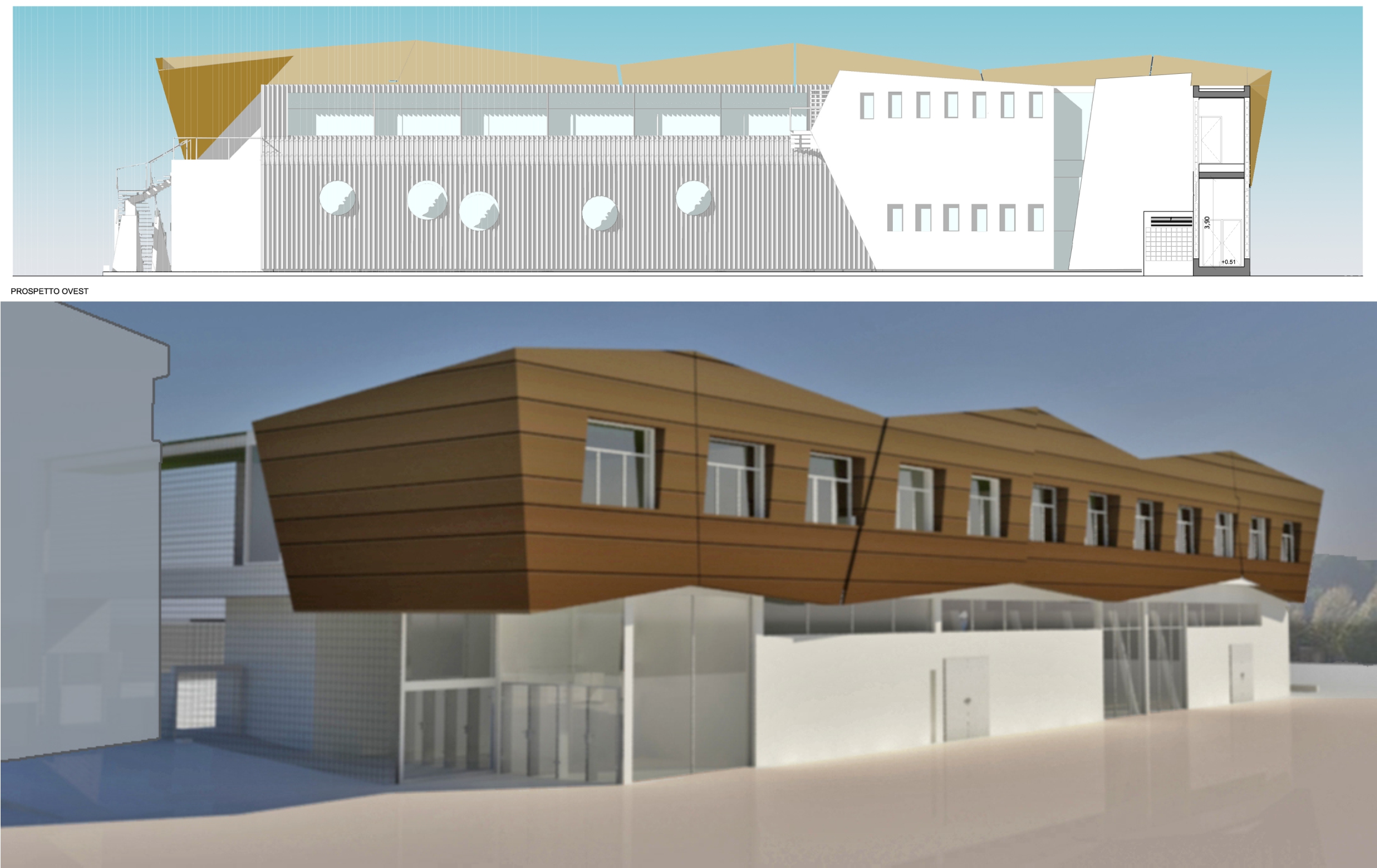 The project develops the planimetry of the preliminary project without changing the functional distribution of the building as required by the tender notice. Instead, it tries to customize the intervention in order to transform it into a fulcrum of new life of the opposite parking square. To do this, creates a façade that stands out in two :
At the ground floor is created a clog which contains an auditorium. This one opens itself to the square only where it’s provided with access through a glazed compass, protected by the cantilevered plan of the overhead courtrooms and a glazed wall. This last one is completely openable and it’s located in the middle of the auditorium which allows the usability of it also in case of public events when it’s necessary to open it as much as possible.

At the first floor the courtrooms are surrounded by a sandwich-shaped tilted wall that performs different tasks. It creates a scenography to the square with it’s tilted cuts, it creates a protective shield on the wall below and, and it’s tilted in order to create such a depth. This effect allows to make appear superfluous the shielding of the courtrooms exposed to west. As well it’s made of a material that doesn’t require continuous maintenance and also the usage of scaffolding, as it’s a pre-finished aluminium panel.

The attachment with the school is realized through a innovative glass-concrete wall. This glass is similar to the energy-saving one, that reduces the thickness of the walls ensuring the energy protection; it well interfaces with the school’s materials, a combination creating a boo effect which doesn’t overshadow the school’s entry. For the entrance of the school, is maintained the preliminary project’ solution regarding the flight and the staircase access under the portico. It’s suggested to place the gate in order to facilitate the access and the escape of the fire brigade.

The south side has an emergency exit, that customizes the short front. For those arriving from the historical center passing by str.Trento, it becomes the calling card of the square. The solution with the tilted partition wall in reinforced concrete and the innovative solution of steps supported by a steel tube, animatea the front making it less generic. The façade towards the already existing school is customized by the presence of the tilted façade of the auditorium: it was thought indeed for a better maintenance and to ensure greater light to the narrow passage between the high buildings facade of the auditorium. In addition it could become a single thing with the overhead roof by deleting the small terraces, so making easier the cleaning and the maintenance. Great portholes like the industrial ones will give light to the room and will customize the wall.

The roof will be visible both from the school’s courtrooms and from the tall buildings of Primo Maggio’ square. Consequently it was decided to use a green roof with a inverted roof system like the Daku system with Sedum plants that don’t require maintenance and also absorbs the rainwater, in addition to a better environmental comfort.